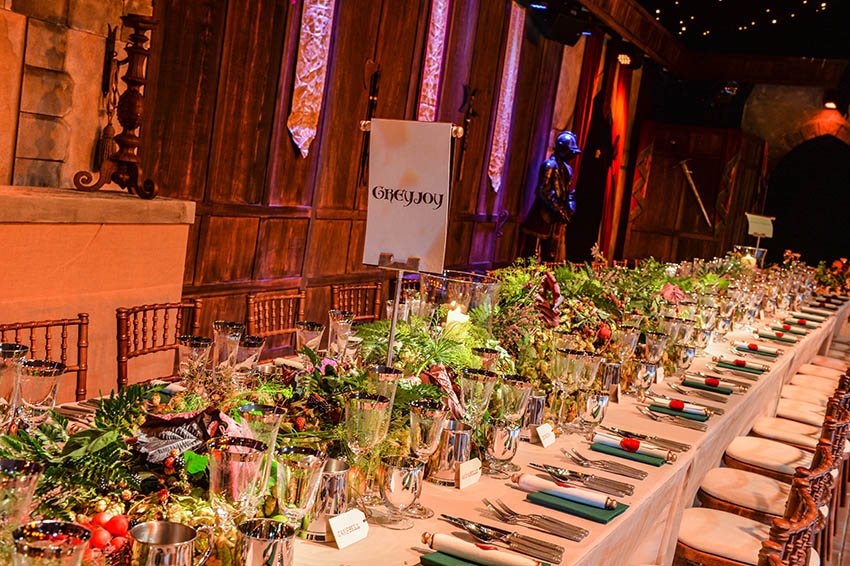 The organisation of any wedding needs a keen eye for detail. However, when the bride’s vision involves three days of celebrations, a bespoke-built nightclub, a wedding breakfast in the backdrop of a magical garden, a Game of Thrones inspired wedding feast complete with medieval village and sunken banqueting hall, AND a guest appearance by the couple’s favourite band Texas. Well, that’s when a little bit of TLC magic goes a long way. Oh, and did we mention we had just four months to pull the whole thing together? 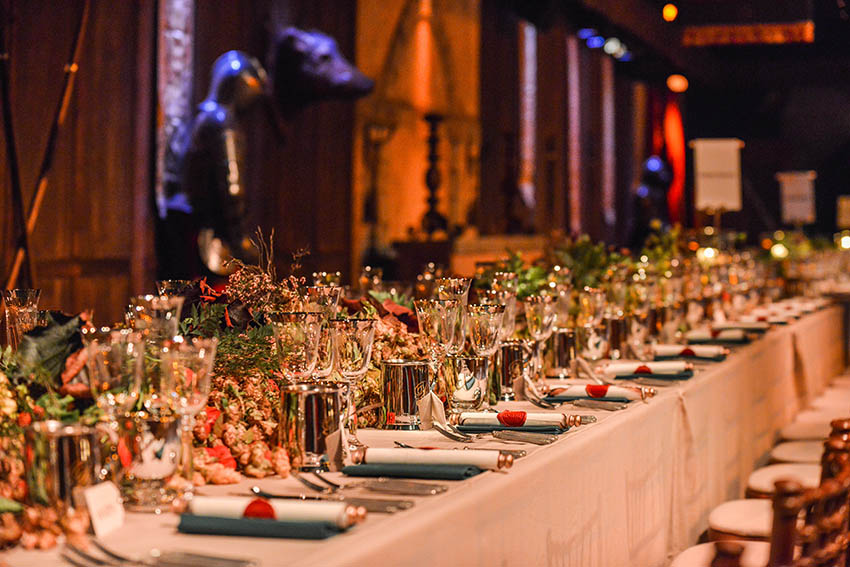 This show-stopping wedding was certainly a party to remember, and a tale of two themes. It was a huge production, that involved some extreme logistical conundrums that would have challenged even the most seasoned event planner.  But luckily – if there’s one thing that as one of the country’s top wedding planners, TLC loves, it’s a challenge. Here our Operations Director, Ellie Barnes shares the unique event from her perspective: 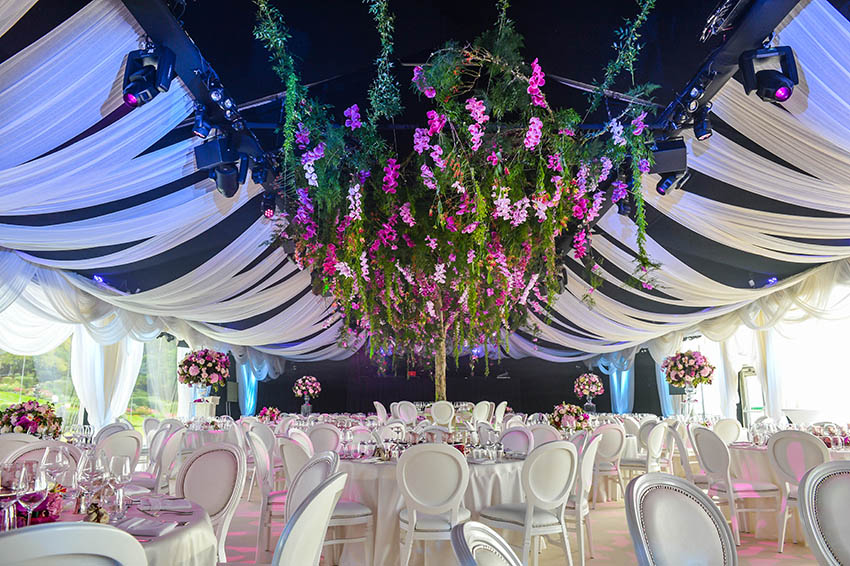 Firstly, like most TLC productions this wedding was completely bespoke. It was to take place in Autumn in the magnificent surroundings on 18th Century Country Manor in Hampshire. The bride was very creative and had some very specific and imaginative ideas which made it both challenging and immensely exciting to work on.

It was to be a two-day event.  Both days being hosted in a marquee structure that we had purpose built on the venue lawns. The wedding ceremony would take place inside the hotel, with the wedding breakfast in a marquee. This was to be dressed as an enchanted garden. A French band providing the entertainment. Then it was on to the ‘after party’, which was a “nightclub” we created in the venue’s event space.

Day two took the form of a medieval banquet. A Game of Thrones inspired wedding feast. Here the wedding party spent the whole day in the grounds dressed in medieval clothing and had to gain entry to a purpose-built medieval village. It ended with a feast to rival that of any Winterfell celebration!

And the icing on the cake. We had just four months to organise the whole event as we were brought on board when the couple realised they needed extra resources. An event management company that could really make things happen.

The client had committed to The Four Seasons Hotel Hampshire before securing our services. Although it may not have been our recommendation for this event due to the very specific instructions from the bride, it’s an absolutely magnificent property and the staff there were brilliant to work with and couldn’t have been more helpful.

There were 220 guests, a combination of some from overseas and those from the UK. The bride was German, and her parents didn’t speak English, so right from the off we knew we’d have to arrange practical things like translators so that all the guests would have the same wonderful experience. 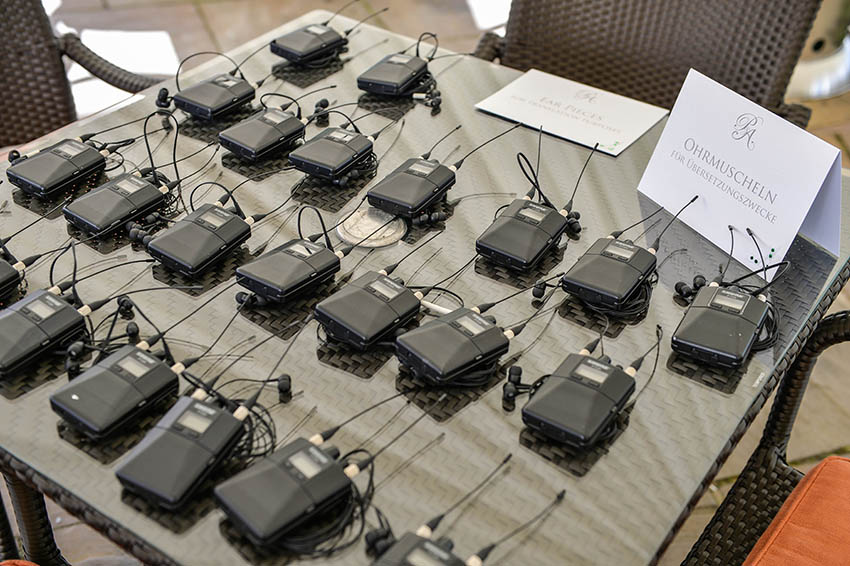 Throughout the planning of the event we worked very closely with the groom’s PA – she was the key contact for the event, and we were in almost daily contact for around two years leading up the event.

One of the reasons for this was that the production was huge. We basically had to put together two vastly different full events, back-to-back. The construction of the sets for these events would usually take multiple days but TLC is renowned for thinking outside the box and making an event even more sensational. It was in trying to solve this problem that we actually came up with the masterstroke that made the event even more special. A sensational turnaround, exposing a medieval banqueting hall and home to our Game of Thrones inspired wedding feast, that had been built underneath the original marquee.

The marquee-build started 10 days prior to the wedding, and it wasn’t just a simple structure.  The bride envisaged a magical garden for the wedding breakfast marquee. This included a huge central orchid tree and floral canopy, scenic stone tables and an abundance of flowing ivory drapes. It looked sensational. 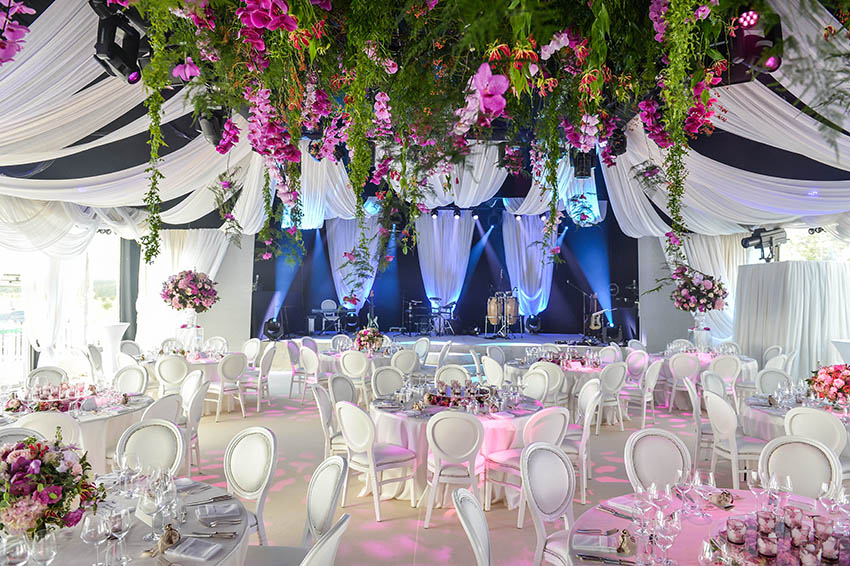 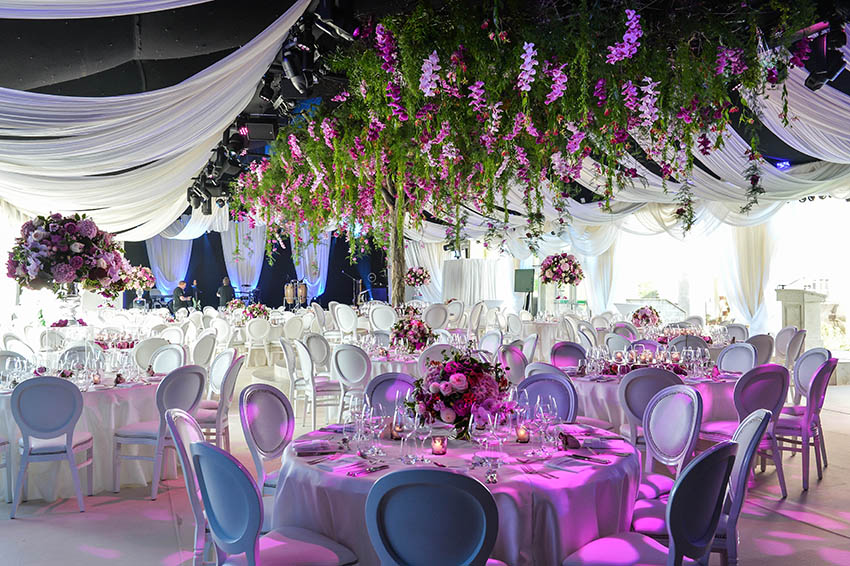 For the day two of the celebration, the bride (an avid Games of Thrones fan) wanted us to create a huge Game of Thrones inspired wedding feast. A banquet room complete with a sunken floor and long wooden tables.

To enable us to achieve this, we came up with a two levels concept for the event.  As with all of our events, this was the intricate and unforgettable element that provided the wow factor. Firstly, the Game of Thrones inspired wedding feast marquee was built.  It was dressed and then covered with the magical garden marquee. After the wedding reception finished on the Saturday, we then ripped out the magical garden to reveal the banquet underneath.  We then worked through the night to complete the build of the medieval marquee. Top wedding planners have to be inventive all the time – finding solutions is part of what makes us a key element to wedding planning.

This was one of those parties that part of me wishes I’d been a guest at, rather than being the organiser. Guests arrived on the Thursday evening/Friday morning and we arranged spa treatments, hairdressers as well as all sorts of activities within the grounds of the hotel including falconry and horse riding.

On the Friday evening there was a welcome BBQ for all the guests on the terrace of the hotel, where the London Essentials band performed.

Saturday was the day of the ceremony.  This took place in a room at the hotel, guests then enjoyed a drinks reception and canapes on the terrace while being entertained by a string quartet and magician.

Guests were then taken through to the magical garden for the wedding breakfast. They were partying and on the stage before the starters even came out thanks to the amazing Swan Band. The hotel staff looked shell-shocked – they had never seen such a high energy party. After the food, champagne and speeches we had purpose built another terrace outside where there was a huge firework display. During this time, we had transformed a conference room within the hotel into a nightclub, complete with banquet booth seating, a bespoke dancefloor and bar where a DJ, saxophonist and percussion band performed.

Nobody at the party would have guessed that during this time we were busy getting the marque ready for the big reveal the next day. 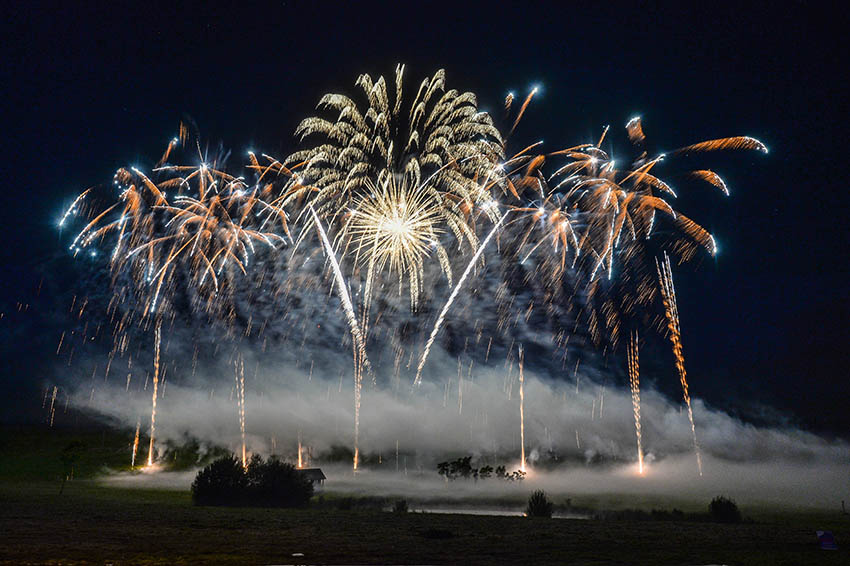 Related Topic: Fresh look? Want to update the traditional elements of your wedding? Here’s how!

The following day, we arranged for more spa treatments and activities in the hotel grounds, where we had created a medieval village. It had a kind of festival feel to it. With a tavern bar, market stalls, pottery making, book binding, jewellery making tents, BBQs cooking food authentic to the era, as well as medieval songs/dances.  All in keeping with our game of Thrones Inspired wedding feast theme for that day.

All guests were dressed in costumes they were asked to bring with them for the weekend. We hired a roving herb seller, a keeper of the fayre and pickpocket and all fayre workers to add to the excitement.

On return to the marquee everyone was amazed by transformation. The Game of Thrones inspired wedding feast was waiting! 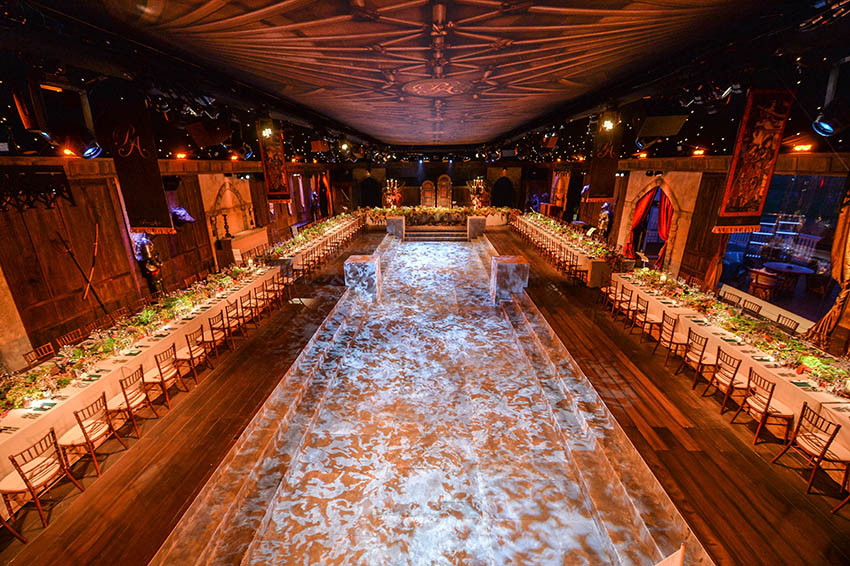 The bride and groom were sat on thrones and the banquet was laid out centrally down the long tables. The meal was purposefully interrupted by a jester who then introduced different medieval acts/entertainment.  After the meal, our piece de resistance. We dropped a surprise reveal of the bride and groom’s favourite band, Texas, who performed a 60-minute show. The party went on until the early hours and everyone, I’m sure, had the time of their lives. 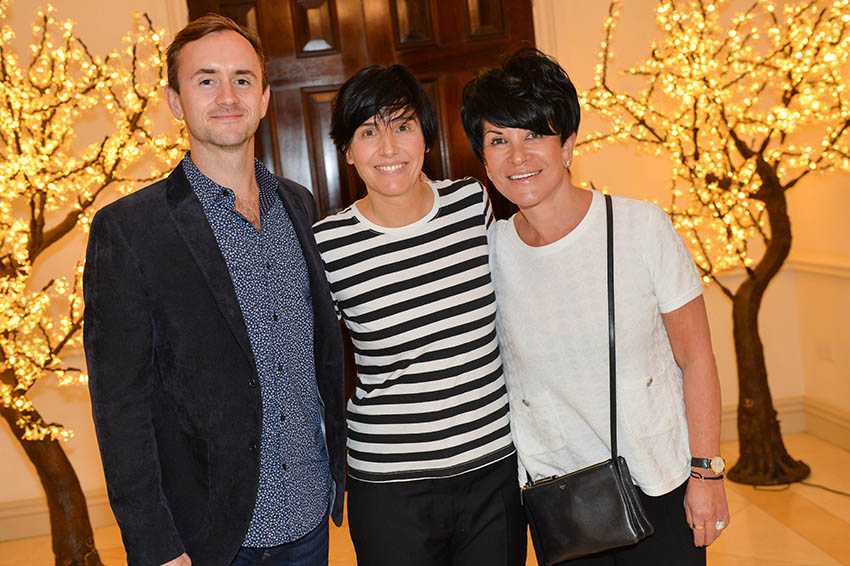 All of the above! The sheer magnitude was the biggest challenge of this event.  The fact that we turned it around with such limited planning time is nothing short of a miracle. That, and the quick turn around of the different party elements, should have been impossible. Somehow, we made it work. It took the most meticulous planning to have all the different elements come together smoothly but there were relatively little hitches over the weekend. That is something we are very proud of at TLC.

The images do not even do justice to how spectacular this event was. There were so many highlights to choose from. I have to say the big reveal of the Game of Thrones inspired wedding feast marquee was a big highlight. And not forgetting the surprise of Texas performing. The bride and groom had no idea that this was going to happen. They were awestruck. It was like something out of a movie. 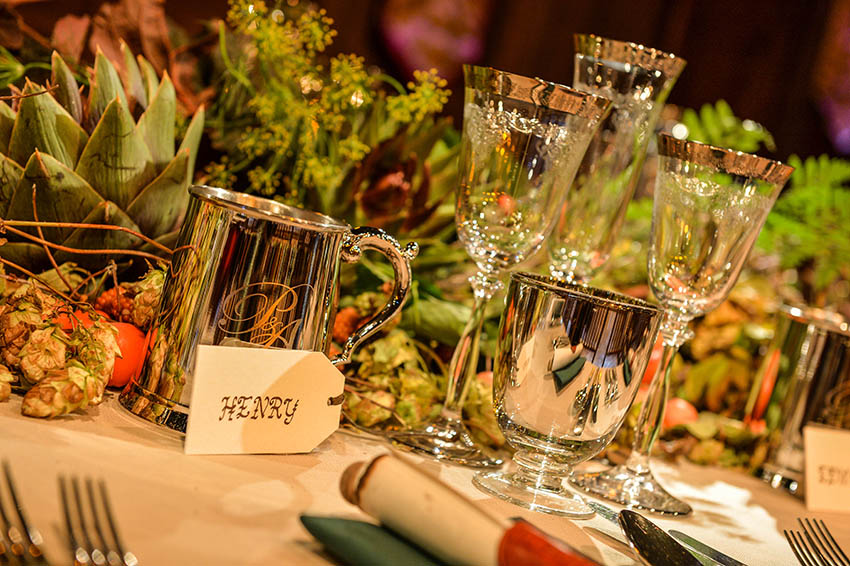 Just talking about this event now still really excites me. I am so proud that not only did I do it, but it was a huge success and the bride and groom were thrilled. It felt impossible at the beginning, but everything went so well and was so well organised – we left nothing to chance. Working on this event was a dream come true and the whole TLC team pulled together to make it extraordinary. Top wedding planners don’t work in isolation.  We rely on an army of amazing suppliers. What a team we make.

Well this party was a huge success – if you had to choose two themes for your wedding….what would they be? We would love to hear from you!