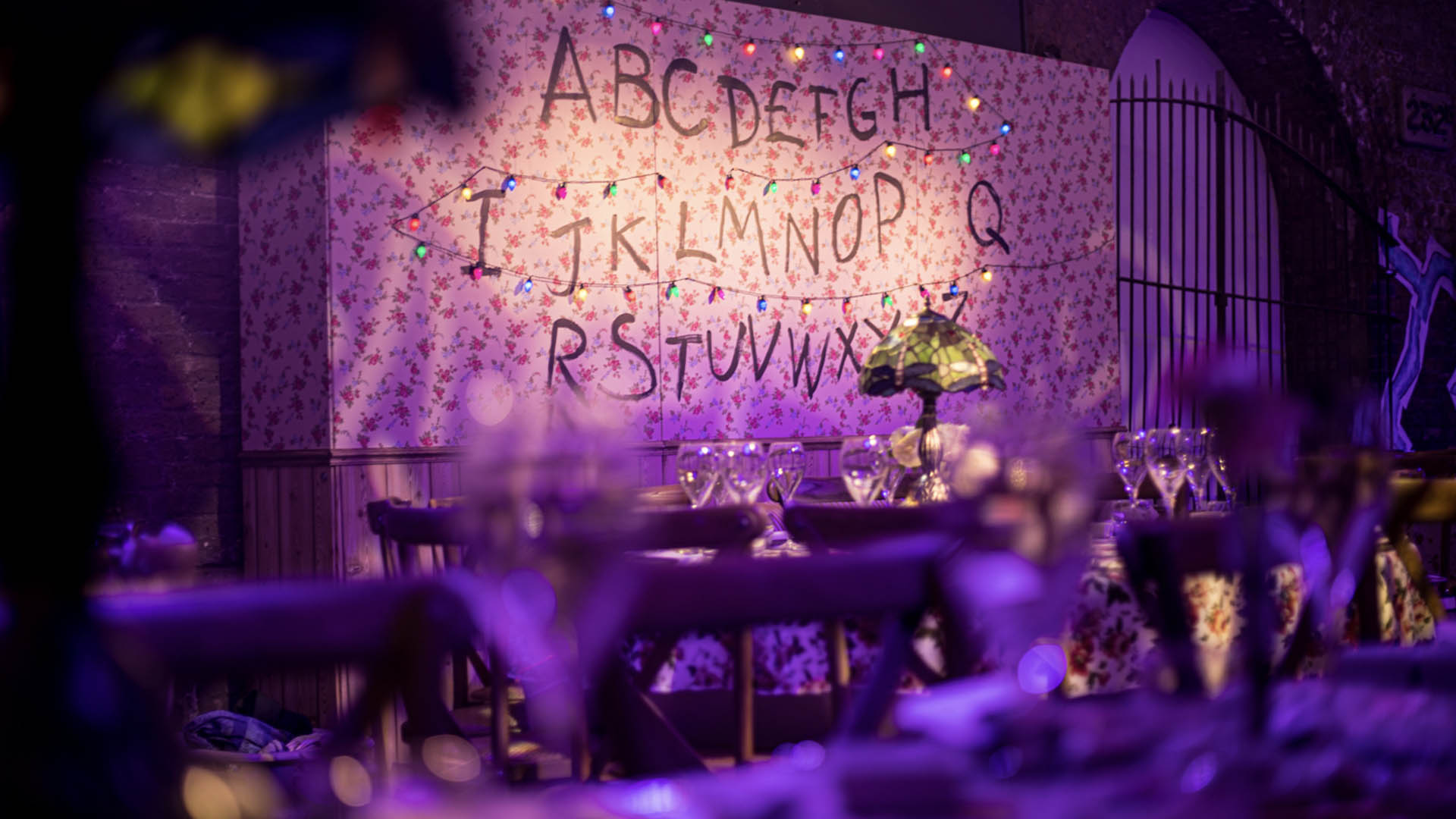 Creating a party with a unique atmosphere is a challenge that the TLC team rise to. Clients sometimes come to us with a clear idea of what they want the ‘theme’ of their event to be. Other look to our imaginations to design something bespoke to the occasion. We work closely with them to uncover the things our clients love and motivate them; sport, music, tv. The inspiration always needs to reflect their personality and personal style. There have been some truly innovative parties as a result, and one of most detailed ideas was taken straight from the Netflix screen, with a ‘Stranger Things’ Party.

‘Stranger Things’ is a sci-fi hit and a favourite show for one young client, who asked us to immerse guests into the supernatural world of Hawkins, Indiana (home of the series). Two years in the making, here’s how our ‘Stranger Things’ party came to life.  Reinvented as the ‘Stranger Twins’ party, thanks to TLC event director, Jess Randall.  Here’s the event in Jess’ words: 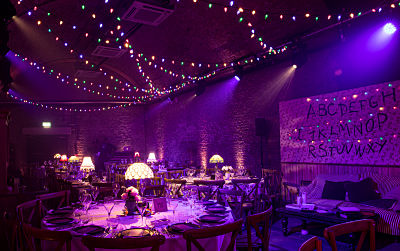 The client had worked with us on a number of occasions, so we were thrilled to be asked to plan this unique party. We had organised the parent’s wedding, produced one of the couple’s 40th birthday parties and planned two of the children’s Bar mitzvahs. They family have four boys, the youngest being twins, and the father is a creative in the music business. Having delivered a Back to The Future party, and our take on a rock festival, the Louispalooza party, we were now tasked with creating STRANGER TWINS.

A party inspired by the series STRANGER THINGS, and as with all our events, the detail was paramount!

February 2020. We started the planning of our ‘Stranger Things’ party from the end of 2018, as so many elements were being specially commissioned for the party.

Firstly, any ‘Stranger Things’ party needs a unique venue. We had sourced two venues before finding the final one for the client. Both venues then let us down. As a result, the search was really on to find somewhere amazing. Weeks of searching and visiting potential places – as always, the backdrop was crucial to the party success. There was a huge adrenalin rush when I secured 26 Leake Street in Waterloo, as I knew the pressure of the search has been worth it.  It was an amazing venue. Raw, unique and contemporary. It was the blank canvas required to turn the fantasy into reality!

There were 240 guests in total, 120 adults and 120 kids. Bar mitzvah parties celebrate a boy’s coming of age in the Jewish faith, so the guests were a combination of friends and family. Most were based in the UK, but some travelled from abroad to the celebration.

This was an exclusive TLC event. It was ‘dry hire’ (completely empty space), so we took absolutely everything we needed into the venue and removed it as soon as the event was finished. The party set-up took two busy days. We worked with numerous appointed suppliers to create the party. Caterers, florists, theme dressers, lighting technicians and production teams. Not to leave out our incredible entertainment!

We had never produced a ‘Stranger Things’ party before and yet it has become one of our most popular party theme ideas. I totally embraced this because new concepts are always challenging for me, and I enjoy researching into the detail needed to bring the party to life. I also knew the client’s expectations were high, so I had to focus on engaging in his daily instructions and then making them my own. We liaised almost every day for a year in order to make the event perfect. It was about adding the extra little touches to immerse guests into a “film set” atmosphere. 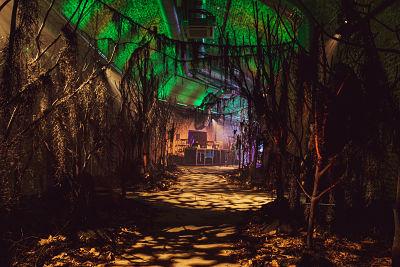 Anticipation was electric because the invitation had been meticulously designed around the theme. So, when guests arrived, they were in awe of the incredible reception area. It has been transformed into the upside-down forest area from the series. Entering through a long graffiti archway under Waterloo Station and leading into adjacent railway arches. Guests were immediately immersed into the theatre that we created. 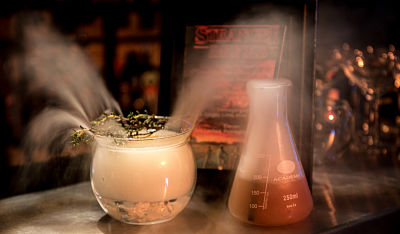 Guests were greeted with ‘Stranger Things’ party themed cocktails (and mocktails for the children).  Cocktails were named based on different ideas from the series. Eggo Waffles, the Science Lab, the Demogorgan Monsters and the main child in the series. We then themed these drinks to match their names and ingredients. Presentation was key. For example, the Hawkins Lab cocktail we served in a science beaker with dry ice coming out of it. 80’s American style canapes were circulated. Slider Burgers, Mac & Cheese Balls and Mushroom Vol-au-Vents.

During the drinks’ reception, a sensational acoustic boy band entertained guests.  A roaming performance amongst the guests.  But the entertainment didn’t end there.  At the far end of the drinks’ reception tunnel, we created an arcade area for the children which included a large variation of 80’s style arcade games such as Dig Dug, Pacman and Pinball. 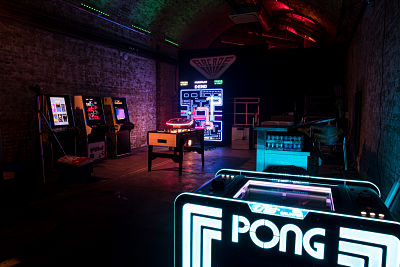 We transformed the second tunnel into the dining and party area. At one end we created ‘Joyce’s living room’ for the adults dining area. This space was filled with random shelves and tables scattered with ornaments, 80’s games and vases with flowers.  A ceiling of coloured fairy light bulbs was created to give the space the “Joyce” touch.  A fabulous ‘Alphabet Wall’ was installed. This is an iconic image associated with the Stranger Thing series and we used it both as a backdrop and as a unique photobooth area. 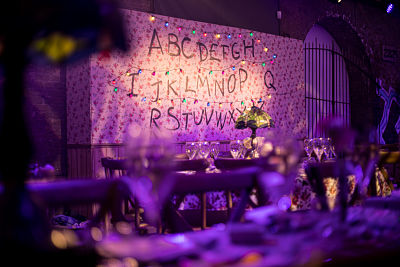 The adults’ main menu was based on a restaurant in London called ‘The Coal Office’ which served Lebanese small plates. We had been for a tasting at this restaurant when we first started planning the event and fell in love with the food. Our event chef re-created the menu and served the food in waves. 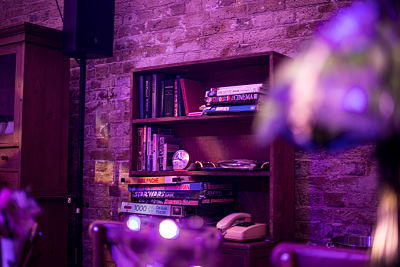 The upper level of the second tunnel was more contemporary and had white walls, pillars and metal stairs. It worked perfectly for us to turn this into ‘Hawkins Lab’. This was the kid’s dining area. We used high white lab style tables and metal stools. Tables were dressed with pieces of science equipment; Bunsen burners, syringes, petri dishes, goggles, lab coats. We also hired some amazing lab equipment such as X ray machines for authenticity. . 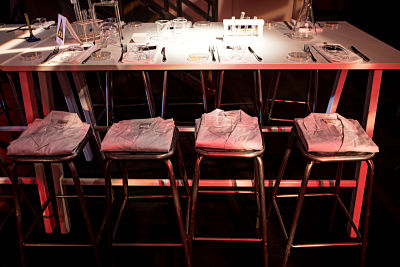 We kept it the kids’ menu simple and to match the theme. They enjoyed KFC style fish fingers with a range of sides such as fries, smoky BBQ beans and corn. We had a nitro ice cream station and a doughnut wall set up for the desserts. 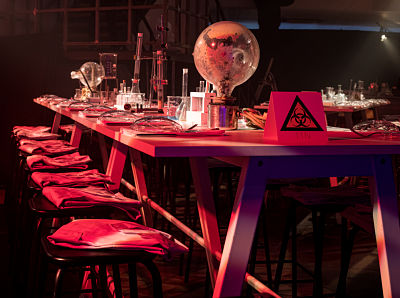 We had a live DJ, Sax and Percussionist who performed sets throughout the evening, and they brought unimaginable energy to the party. A combination of a DJ and musicians is a perfect combination. Importantly, they can engage with all ages, so that the children and adults are on the dancefloor from start to finish. They played a lot of 80’s style music to match with the theme of the party. 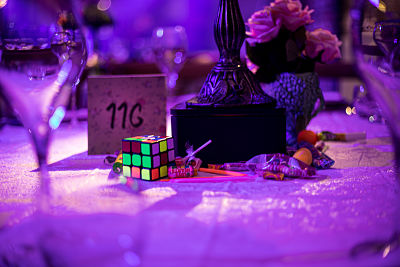 As a huge amount of time was invested in planning our ‘Stranger Things’ party, and a number of planning challenges overcome.

The first venue we contracted had a fire and burned down, so I was tasked with finding another venue quickly. I researched and investigated about 70 different venues in London to suit our theme over a number of months. Essentially a blank studio space was needed.  Days and weeks invested in going on site visits to different venues. Finding perfect venue, only to then find that the first option hold on the venue wanted to confirm the space. Back to square one!

In the process of all of this, our client decided to change the theme of the party from a film theme to a Stranger Things party. I found 26 Leake Street after a lot of research, and following a visit, everyone immediately fell in love with it.

It was evident from the start that this was going to be a huge build, with a number of suppliers needing to arrive at exactly the same time on the day of set up. Only the day of the party had been contracted for set up, and we had just 4 hours after the event finished to de-rig everything out of the venue.  In addition, every single thing had to be cleared out of the venue and our rubbish removed, with not even a single bin provided.  As we were building everything bespoke and bringing in numerous props, this was going to be a massive challenge.

Thinking outside of the box – what TLC does best – we negotiated with the venue.  The project was a great subject to create a time lapse promotional video.. So, we swapped a copy of our time lapse footage for the venue’s own promotion, in return for an additional days’ set up.

As the entrance to the venue is in the middle of a tunnel that is accessible by the public, we had to ensure that security was tight. During the whole set up, the public were constantly trying to get into the venue to have a look what was going on which was a challenge, as we needed to have the doors open for deliveries.  Additional security were hired for the day to keep the public from accessing the party.

Set-up was completed with an hour to spare and we were excited for guests arrive. We underestimated how much space the ‘Forest’ area would take up in the first tunnel. That meant by the time 250 people had arrived, space was limited for the drinks’ reception. As amazing as it did look!

When we called people through to the main space, jaws dropped!  A separate adults’ dining area and a kids’ dining area had been arranged. Due to the tunnel being so long, the  dancefloor was situated in the middle separating these two areas.  We had to ensure that we incorporated both groups into the party and onto the dancefloor.  This was a struggle.

Lastly, there were a number of speeches due to happen at different stages throughout the night from a temporary stage, so logistics, specific timings, event management and organisation were all a priority.

With a massive team effort from our amazing suppliers, we managed to clear everything out of the space in the allocated hours without any problems. 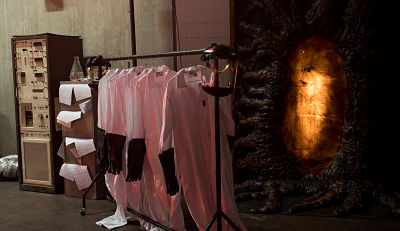 I was secretly very proud of myself. I had orchestrated a magnificent event and accepted the glory graciously! The feeling that after 18 months of planning, a 48-hour crazy set up and over 40 different suppliers, the space was transformed into an incredible ‘Stranger Things’ party. It that captured exactly the feel that we wanted it to and am thrilled it has become one of the team’s most popular party theme ideas. Every last aspect had been thought of, and each area resembled the theme to a tee. Seeing the guests faces as they arrived at the venue and then again when we revealed the main room; it was so rewarding. Guests were able to immerse themselves into the world of ‘Stranger Things’ – even just for as few hours.

I think that the excitement of finding this venue took-over from a creativity perspective. Next time I would definitely consider the challenges from the logistical side a lot more. There were definite challenges to overcome in terms of set up and then the running of the party. These I would look at more closely before confirming and contracting with a venue. The set-up is usually the hardest part of an event however, the running of this event on the night, due to a number of factors, was really difficult. We overcame many challenges with the ‘Stranger Things’ party – thanks to a great team. I can definitely take experience from this party and invest it into my next e